CONCEPT
Main design strategy hails from the intention of clarifying the existing urban historical structure, meanwhile introducing the new replenishing framework. Proposed framework should perform as a guide which will help to orientate around, along with distinguishing public-private zones. Consequently, the front part of the plot elements functions as a common gathering area for both dwellers, tourist, local or foreign students, where they can go shopping, enjoy an afternoon coffee or just wander around. At the same time, the back courtyards serve as a more private recreation/leisure zone for students and even nearby residents.

SITE PLAN
Responding to the irregular geometry of the plot boundary, it was divided into two more explicit functional zones – student and commerce orientated. Commercial (together with service part) is placed in such way, to face the E. Birznieka-Upisa street and consists of two components. Firstly, boulevard, which invites passersby to slow, and secondly, enclosed public square. (add emotions?). Simultaneously, student orientated part offers 3 function zones. First is semi-public square, which has more technical purpose (bicycle parking) and provides a physical connection to the student housing. Then, on the right side of the semi-public square, semi-opened ‘jungle’ recreation zone appears. This is a triangle shaped place for students to gather, socialize, meet new people, share their ideas or maybe spend time quietly among nature reading or playing a musical instrument. The last zone is for sports, which includes different types of sports courts and can provide its facilities not only for students but also for local inhabitants. Each described part can be totally closed, open or it can vary regarding on the daytime. Due to the fact that each part (except inside courtyard) have more than one entrance/exit, it creates a circular system of movement. As a result, making one of the parts open or closed will not affect the other parts (no ‘blind spots’ will appear, where people from outside will not be able to enter).

VOLUMES
Following the concept key points, volumetric solution proposes two solid units. Contrastingly from the irregular site outline geometry, units are presented as squares. Such decision/solution makes surrounding context more readable and helps to unify the urban structure. Both forms are dependent originate from each other, since the smaller unit represents the void form taken from the bigger volume, in order to make an inside courtyard-square. Path of the regulated passage serves as a joining axe for the volumes, where bigger volume is parallel to the E. Birznieka-Upisa street and smaller volumes adopt the surrounding house orientations. Both volumes do have a subtle touch only at one point, at the very top of the bordering edge, while the lower part widens and forms a passage to the ‘jungle’-recreational area. Moreover, main (bigger) volume is slightly pushed back into the site and is forming the boulevard, as well, smaller volume is deeper in the plot, separating private and semi-private student zones. As mentioned before, both volumes have cuts though the corners. This cut creates new surfaces which operate as emblematic sighs which orientate around the site.

MATERIALS
Proposed materials are adjusted in such way to put an emphasis on people flow and designate functional use. For commercial/public space grayscale terrazzo tiles for grounding are suggested, meanwhile for the student zone identification same material is used, but in colour, with the integration of bright red coloured stone. These ground material continuous through its assigned zones (public boulevard-square, student semi-private square) and later expands on the solid tilted walls and give enthesis on the movement and entrances for both passersby and students. For background courtyard ‘jungle’ concept is suggested, territory covered with grass/lawn. Such contrast of an urban-natural elements will produce expressive framework making the general quality of the place higher.

Responding to the irregular geometry of the plot boundary, it was divided into two more explicit functional zones – student and commerce orientated. 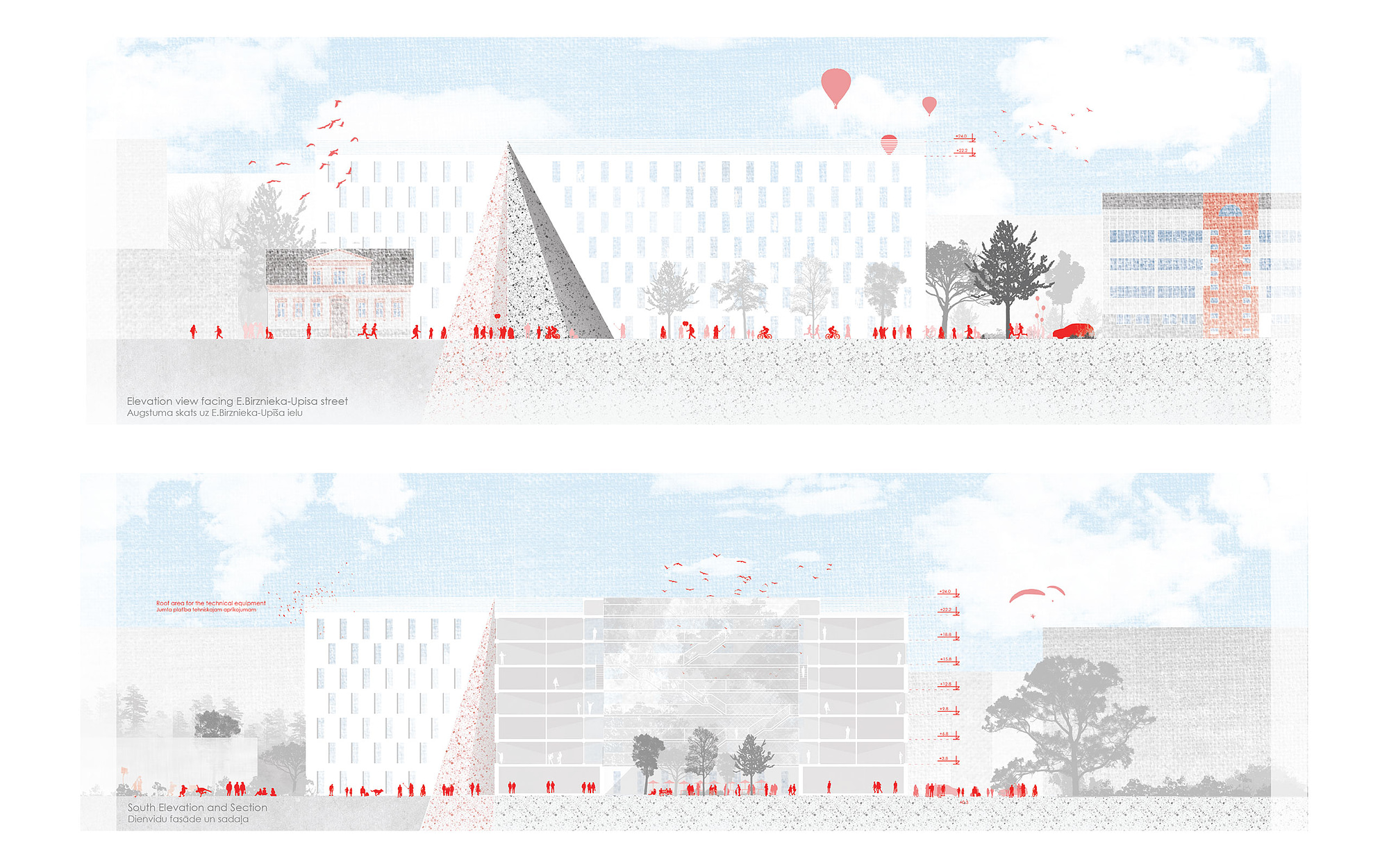 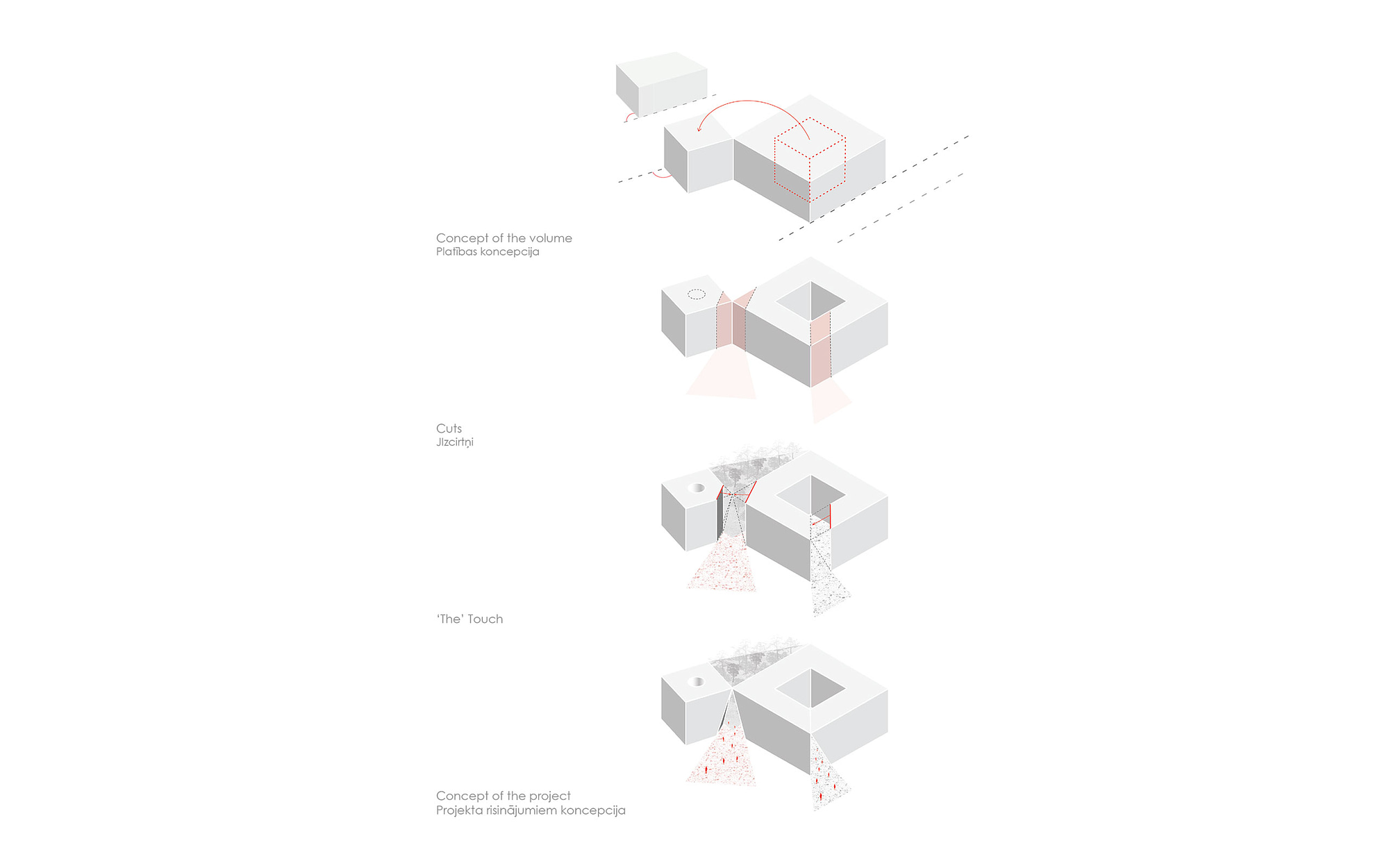 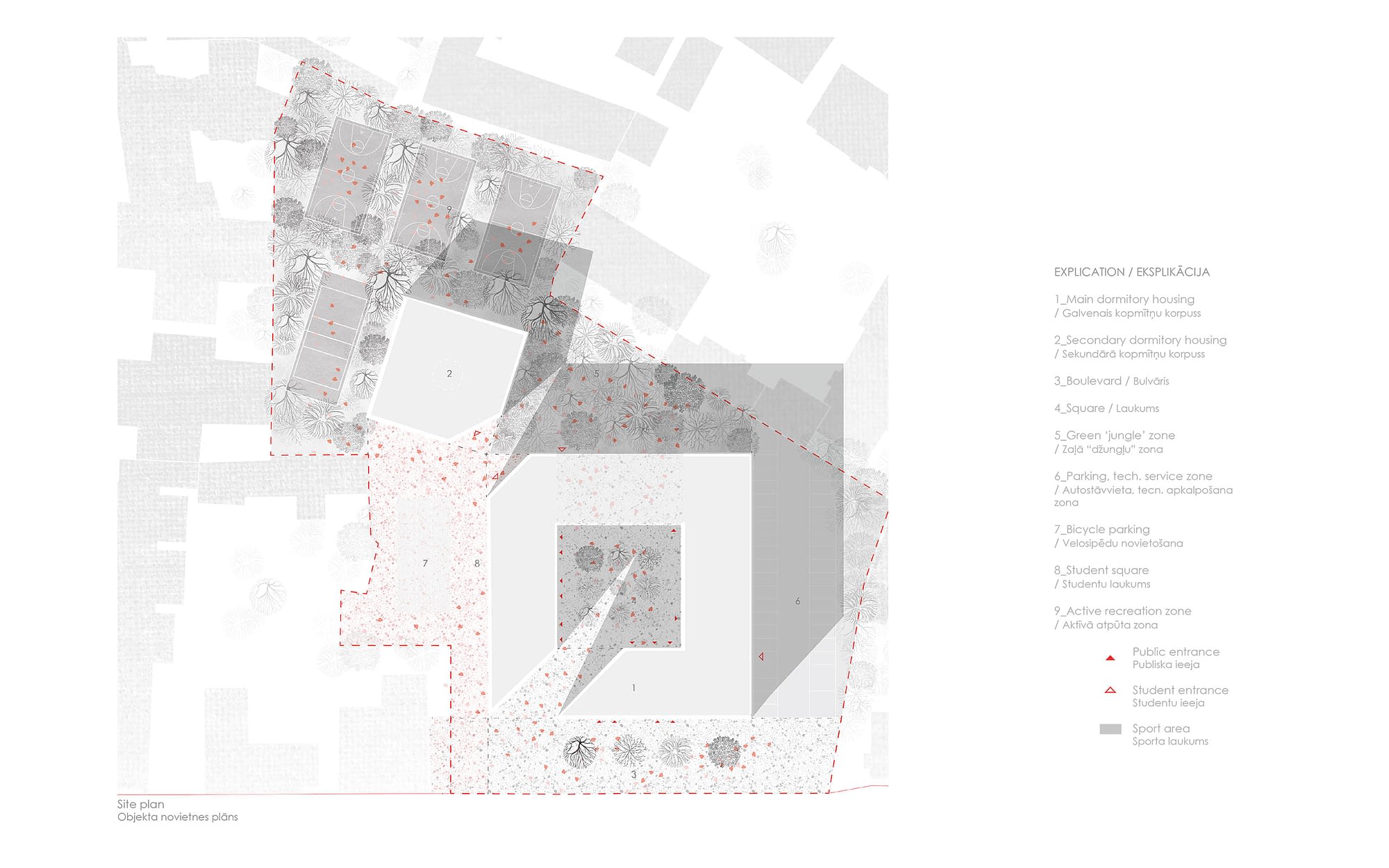 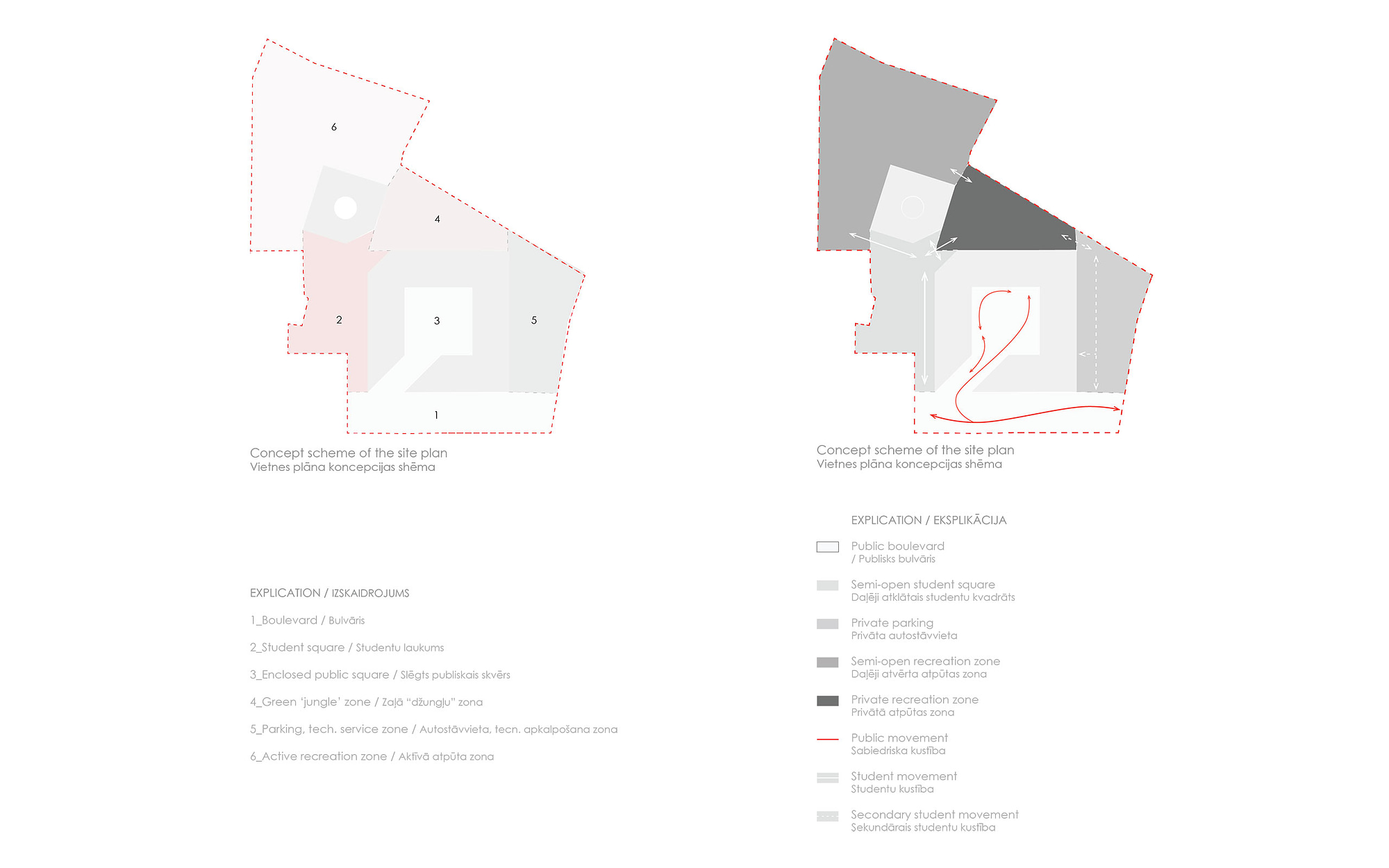 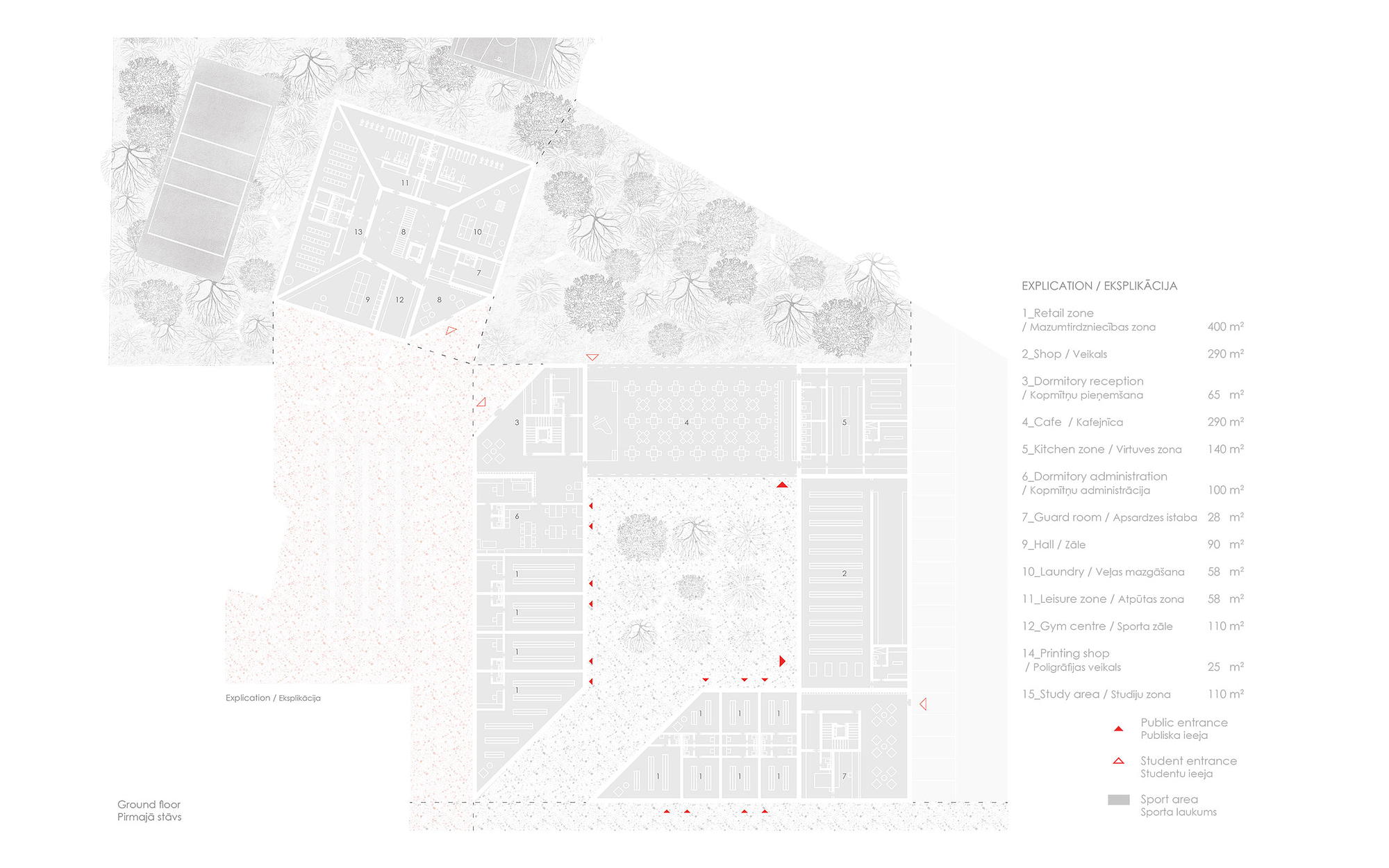 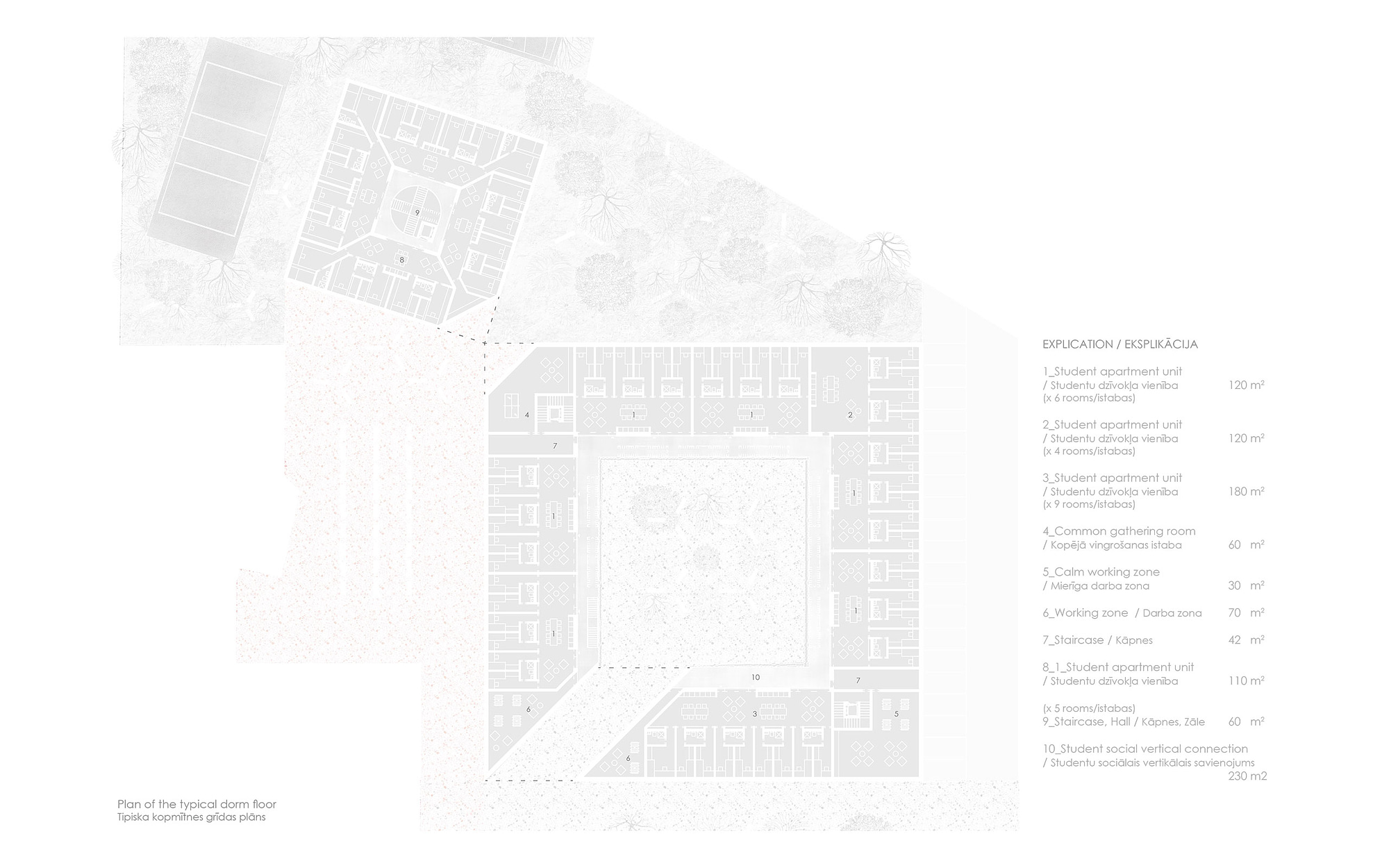 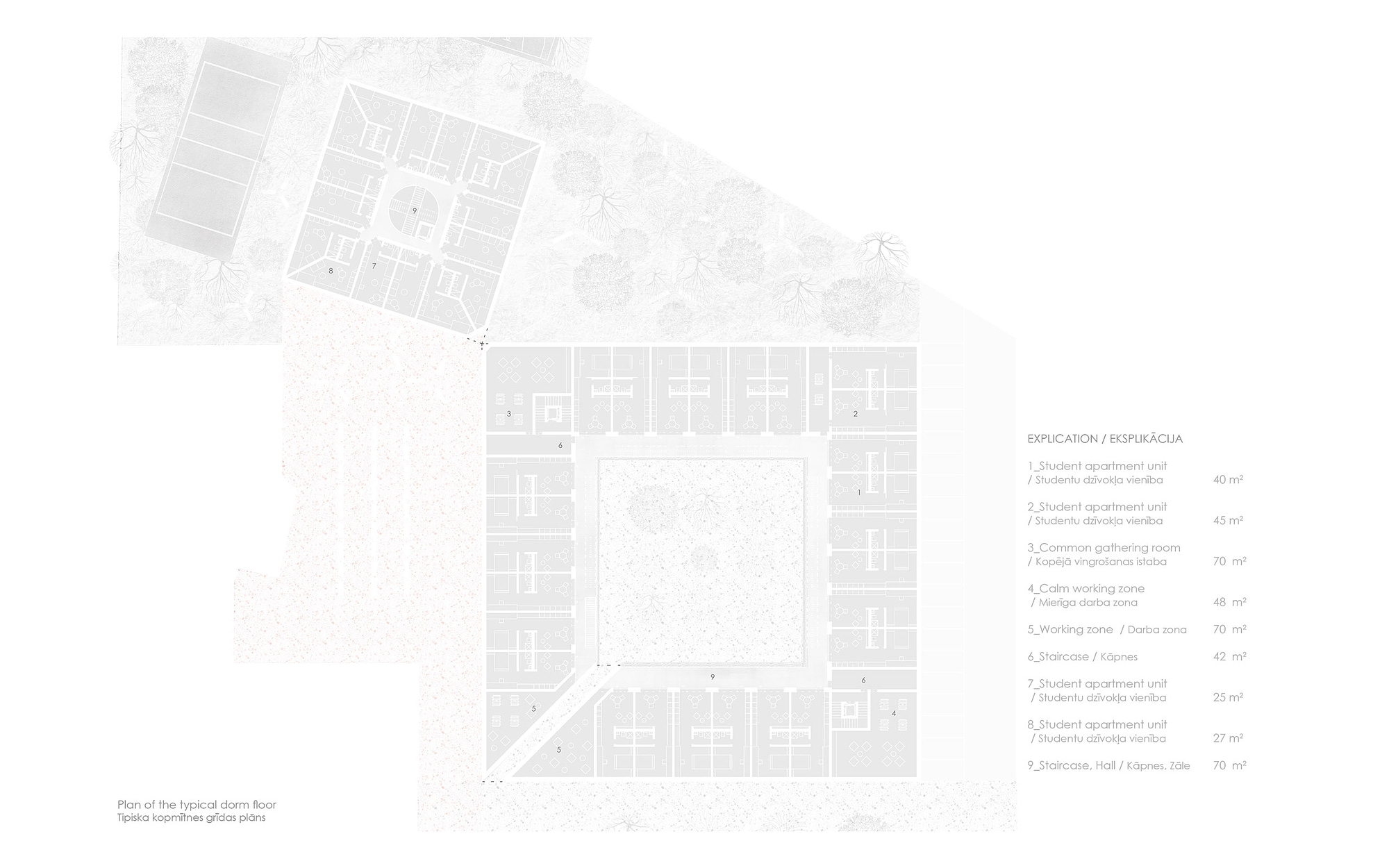 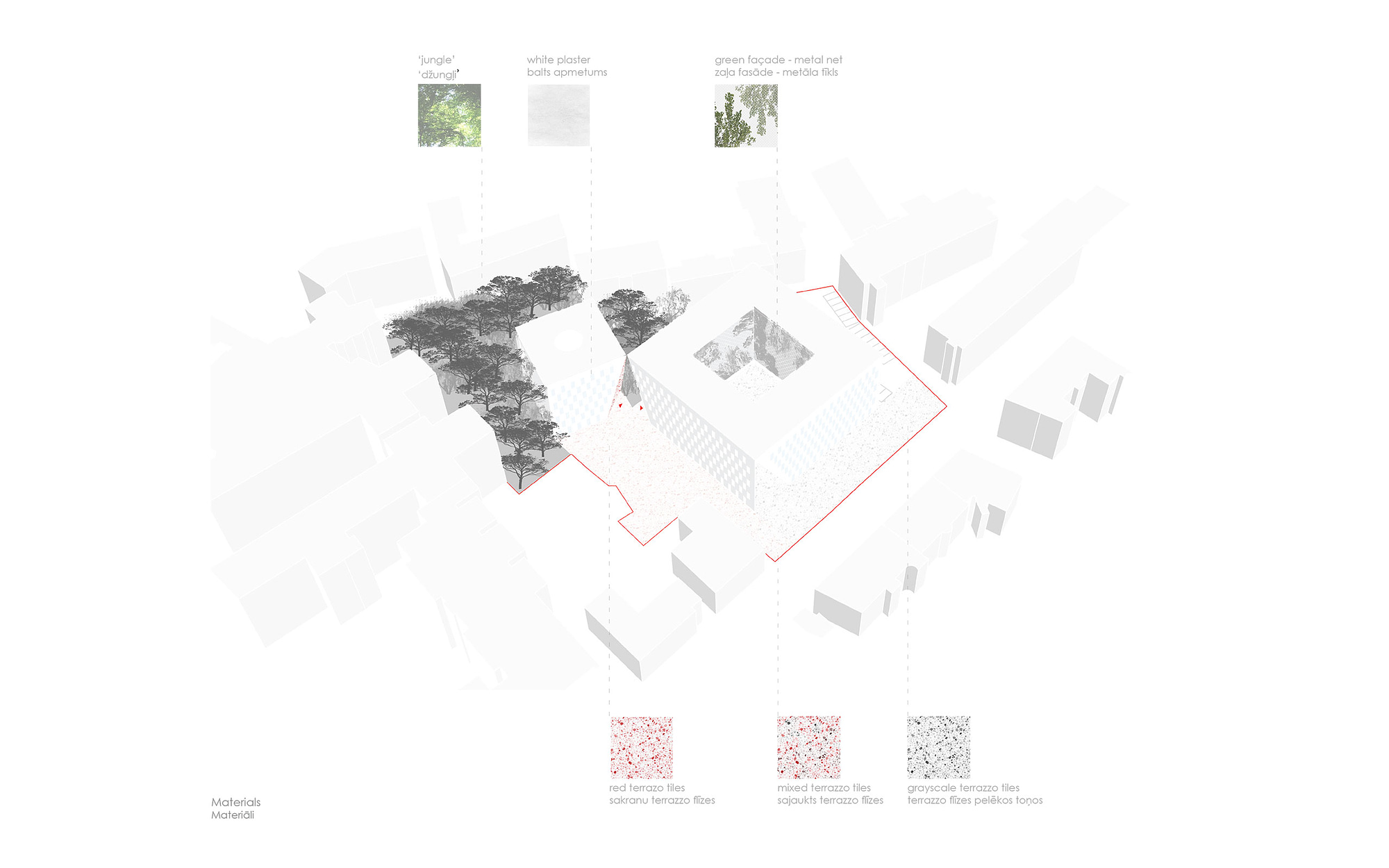 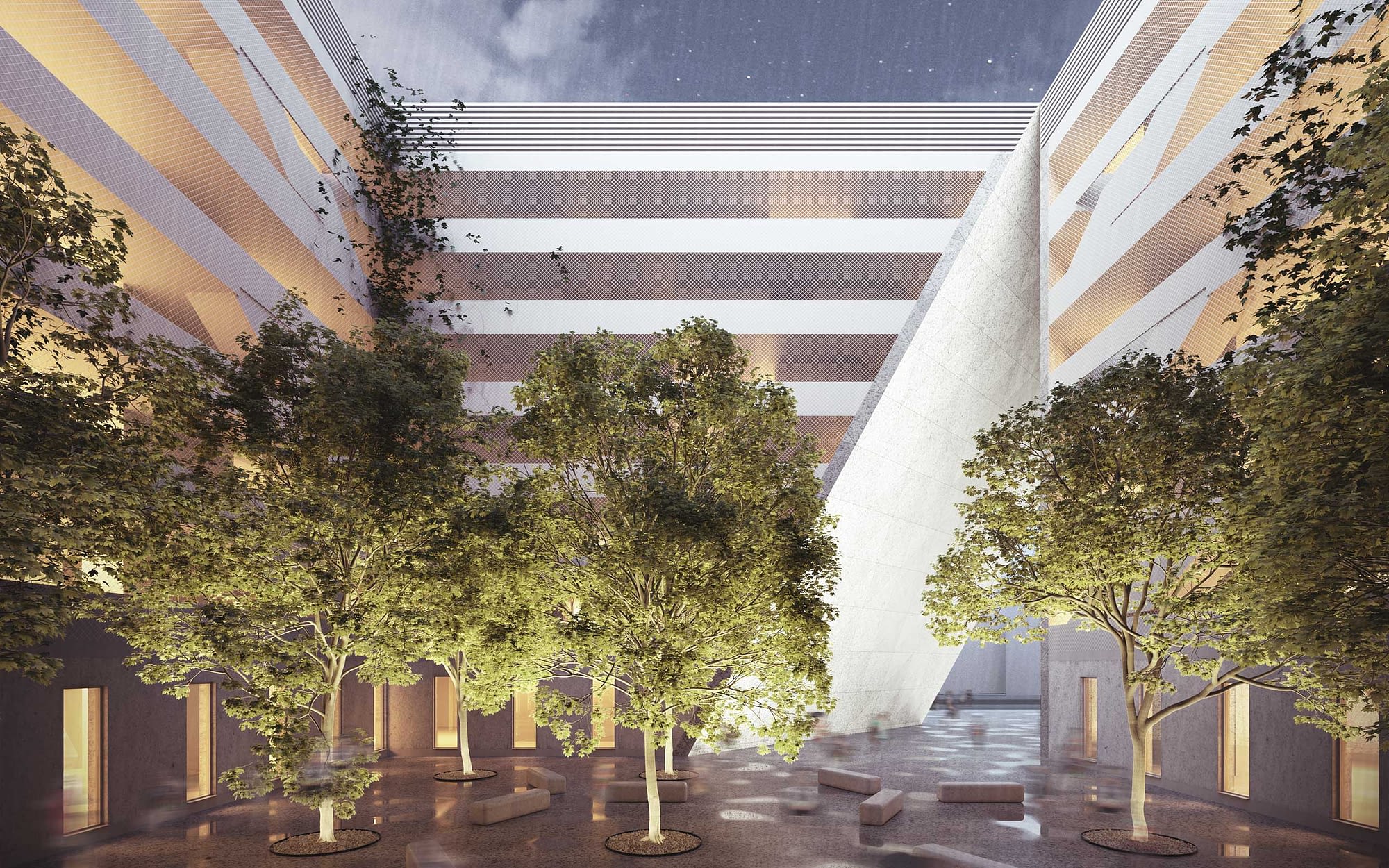 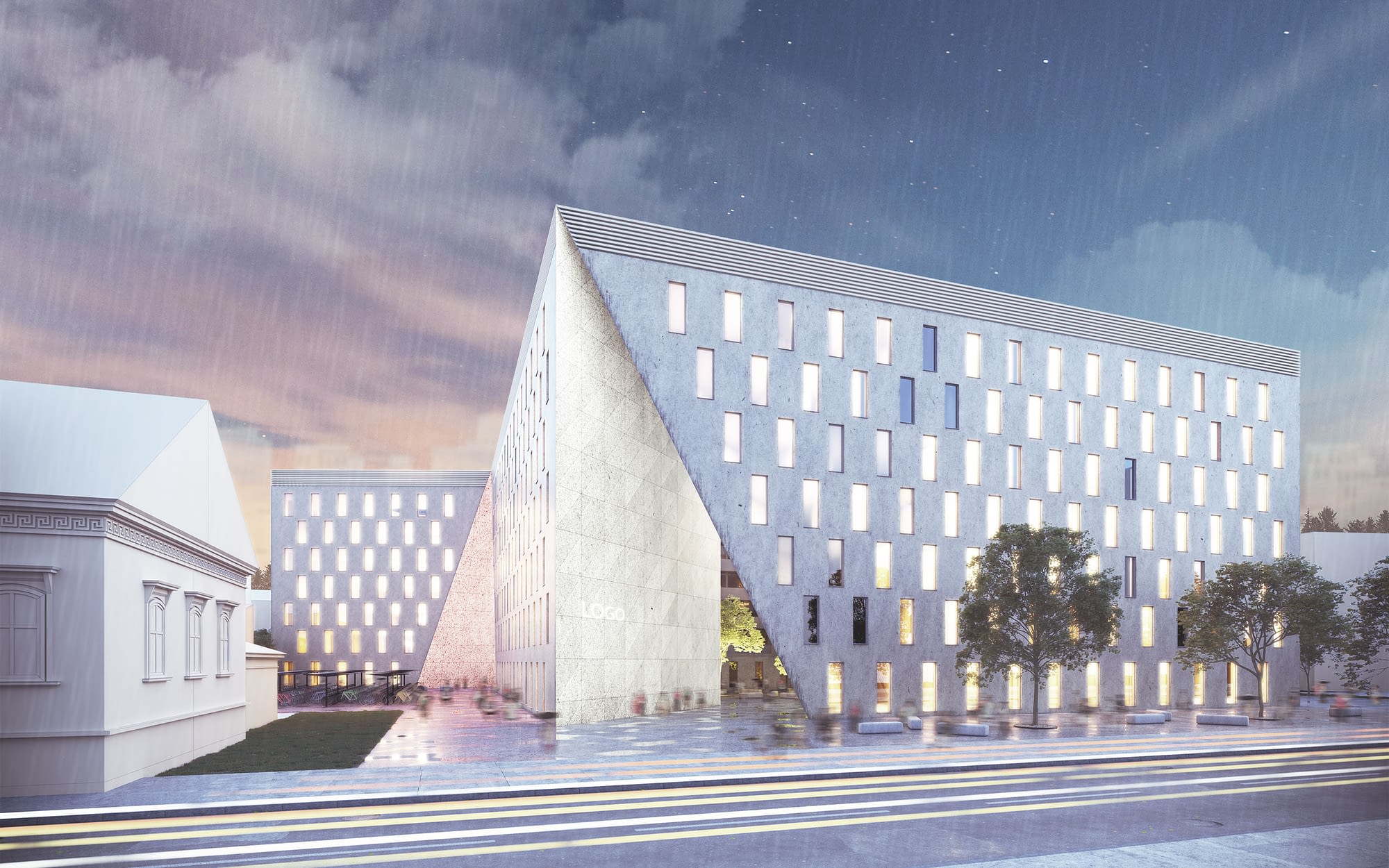 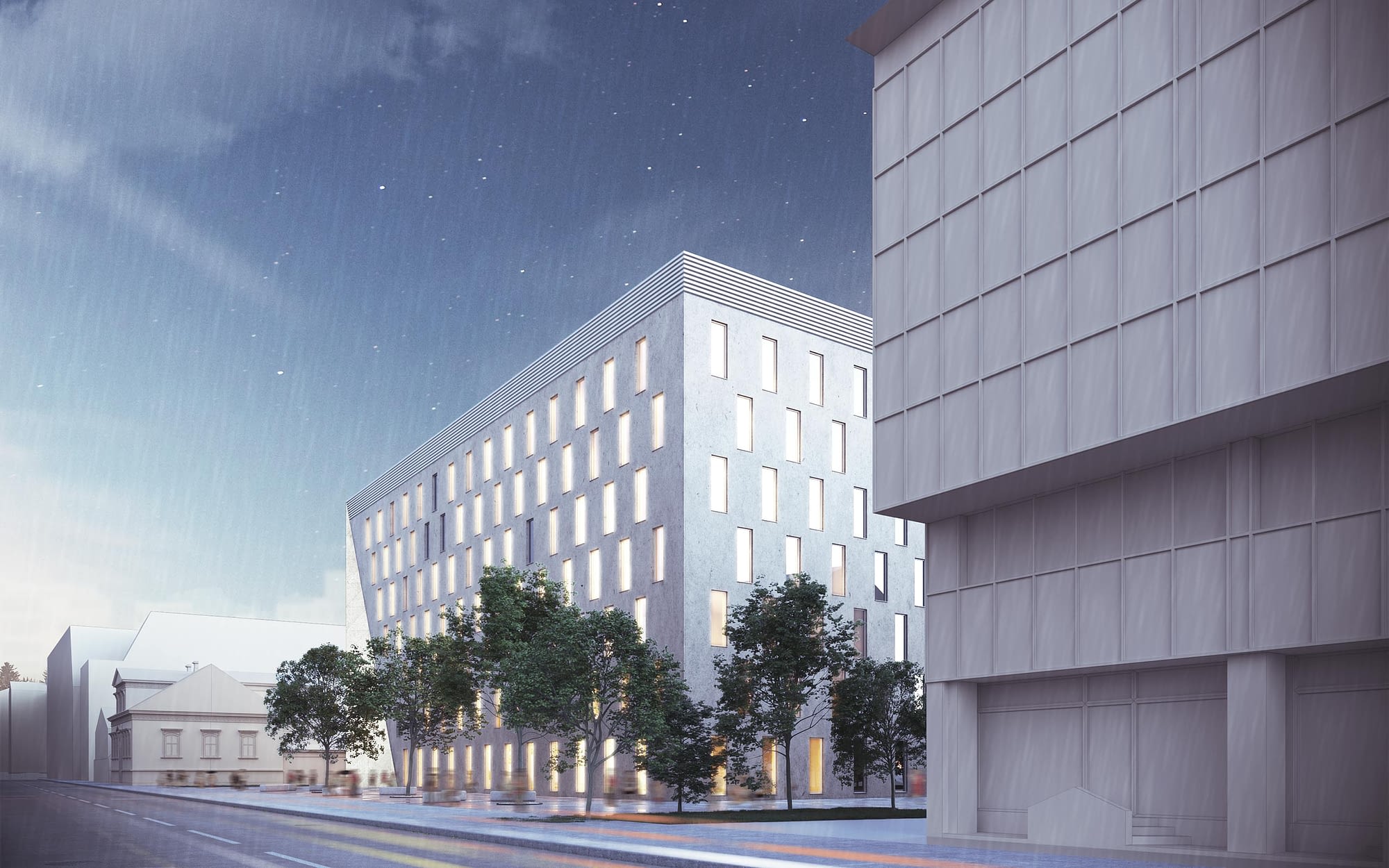 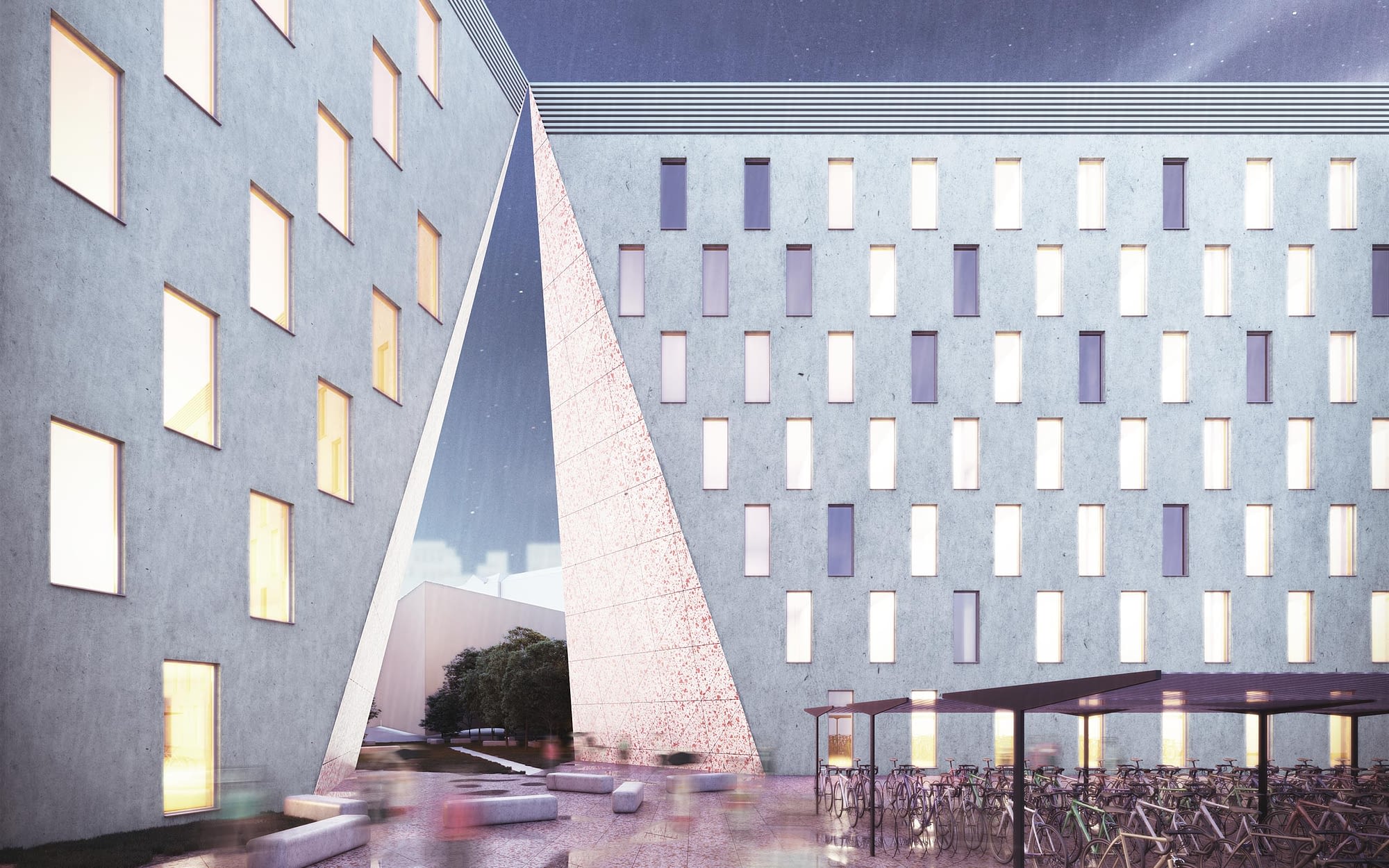 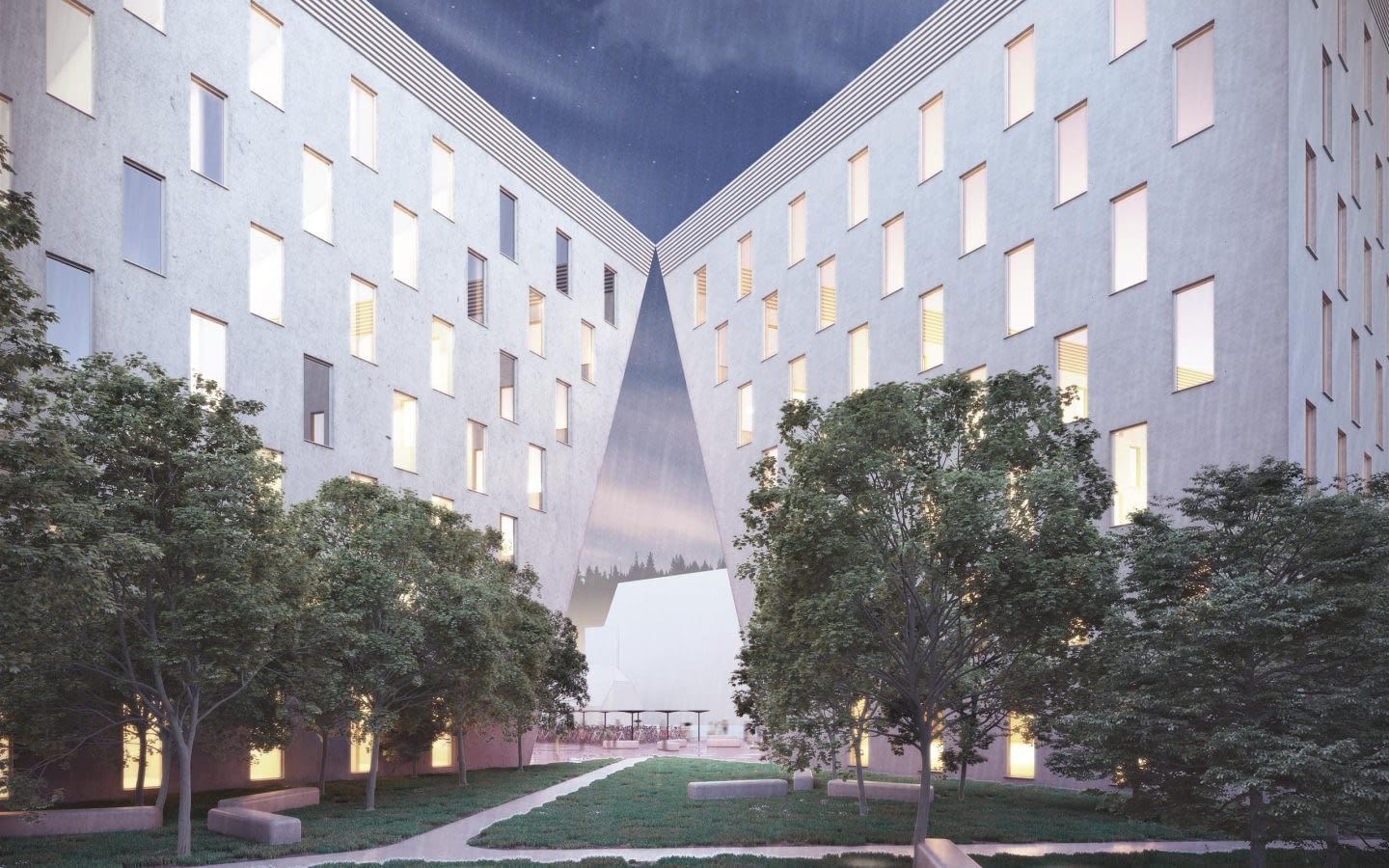 Cuts create new surfaces which operate as emblematic sighs to orientate around the site.